The AIDC 100 was founded in May 1997. The instigators were George Goldberg (Scan Newsletter), Ben Nelson (Markem) and Chet Benoit (Welch Allyn). We will be forever grateful to them for this initiative.

The purpose was to recognize the top 100 contributors to the Automatic Identification Industry. Sixty charter members were initially identified. Since that time, the membership has greatly expanded to reflect the enormous growth of this unbelievable industry that has greatly impacted lives throughout the world. You are encouraged to visit our website at: https://aidc100.org/

In October 2010 a relatively short history of the AIDC 100 was created by Dick Meyers and Paul Bergé. If interested in viewing, kindly go to:
https://www.youtube.com/watch?v=4_-0WXX395w

One of the very first pioneers of the Bar Code industry is Dave Collins. His activity dates back into the mid 1960’s. He founded the very first “bar code” company called Computer Identics. Dave holds multiple patents and has also received the industry’s very prestigious Richard R. Dilling Award in 1992.

He has put together a very informative video about some of the early days of bar coding. To view, click:
https://www.ted.com/talks/david_collins_the_father_of_the_barcode

A video that gives an overview of the Bar Coding and RFID industries was created by Dr. Clive Hohberger of Zebra. To view, go to: https://youtu.be/ZK-aY3fx69A

In June 2021, a Zoom conference was held in Eastern Europe. Brian Marcel asked AIDC 100 Chairman Emeritus Dick Meyers to provide an overview of his 40 plus years of working with this technology. The result is a video that can be found at: https://www.youtube.com/watch?v=T0zpkZwQeNo

The result is a video that can be found here.

FOLLOWING IS A BRIEF HISTORY OF THE ORIGINS OF BAR CODING:

Obviously, there are many other milestones over the past 50 plus years. The aforementioned are just a few of the key events that took place in the earlier era of automatic identification.

Bottom line, it is very difficult to imagine our lives today without the use of Bar Code technology. Not only is it beneficial to us, but industry as a whole survives and grows. As an example, Amazon could not possibly function as they do without bar coding. Lives are saved in the health industry with its’ use. We don’t even think about it as we purchase items in a supermarket. This dialogue could go on and on. The future promises even more!

Speaking of history … many of us remember “Scan-Quake” in San Jose, CA on October 17, 1989. An earthquake that killed nearly 70 people and took place around 5:03pm just as the convention was wrapping up for the day. We have “tall” stories about that event and they have been documented.

It is not just technology that has made this industry so successful. The real achievement can be traced to multiple STANDARDS organizations starting back in the early 1970’s. Without worldwide agreement on how bar codes must be created and used, the level of success today would be virtually ZERO! Here is a partial list of some of the principle STANDARDS ORGANIZATIONS that have contributed so much and literally driven success:

Cognex created a very good summary of the various types of Bar Codes. It can be found at:
https://www.logisticsmgmt.com/wp_content/cognex_wp_expert_guide_symbology_040814.pdf

There are numerous resources that are available to those who are interested in exploring more about the history of Bar Coding. Quite a few books have been written. Members of the AIDC 100 have generously donated both written material as well as actual hardware as used in the early days. All of this material can be found in the archives of the Stony Brook University library in Stony Brook, Long ISland, NY. The listing of these archives may be found at:
https://www.stonybrook.edu/commcms/libspecial/collections/manuscripts/aidc/index.html

And here is an interesting article from Smithsonian Magazine that appeared some time ago. Go to:  https://www.smithsonianmag.com/innovation/history-bar-code-180956704/

Some AIDC 100 members created MEMOIRS of their many years of service to their industry. To review, select from below:

A few years ago, our esteemed AIDC 100 Chairman Paul Bergé (deceased) extended tremendous effort by putting together a chart that portrays the great consolidation that has taken place in the Bar Code industry over the past 40 years.

Look below. (It is suggested that you enlarge for better viewing.) 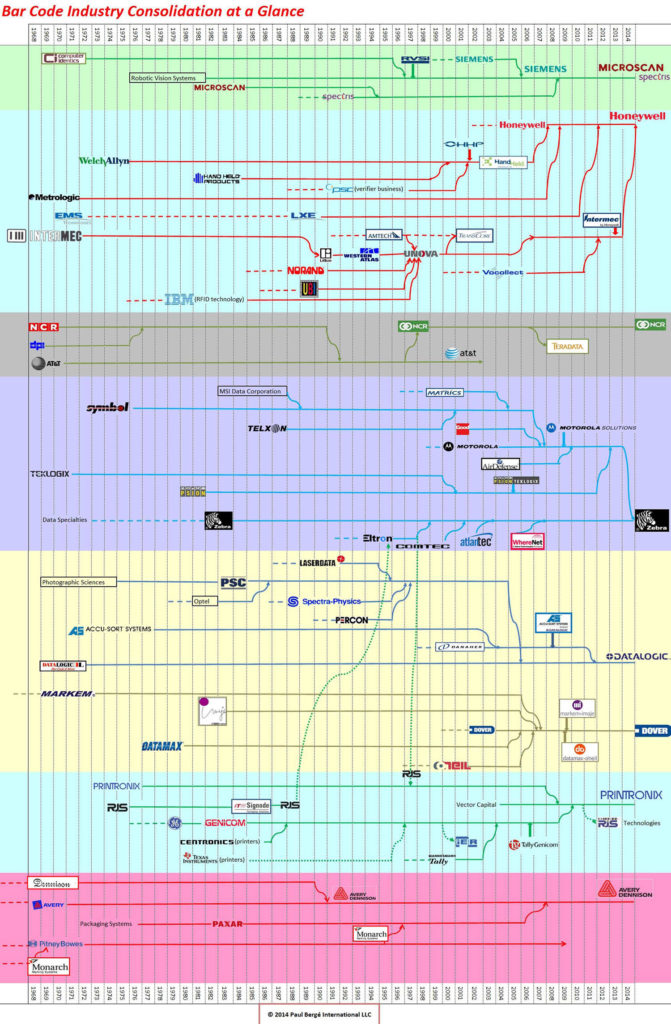 Back to top
Manage Cookie Consent
To provide the best experiences, we use technologies like cookies to store and/or access device information. Consenting to these technologies will allow us to process data such as browsing behavior or unique IDs on this site. Not consenting or withdrawing consent, may adversely affect certain features and functions.
Manage options Manage services Manage vendors Read more about these purposes
View preferences
{title} {title} {title}